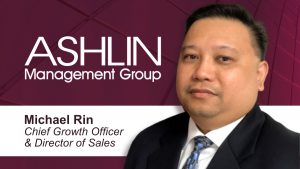 ASHLIN Management Group is happy to announce the appointment of Michael Rin to the position of Chief Growth Officer (CGO). In addition to his role as CGO, Mr. Rin will also serve as the Director of Sales for the company. Mr. Rin is a highly qualified executive, bringing over 26 years of U.S. Navy and government contractor experience with him.

Mr. Rin will lead the ASHLIN team in identifying and developing new business opportunities, by recommending strategic plans for revenue growth and scalability. Recently ASHLIN, an Economically Disadvantaged Woman-Owned Small Business (EDWOSB), was awarded a spot on GSA’s Best-in-Class vehicle OASIS Small Business Pool 1. Mr. Rin’s successful track record of winning new contracts and exceeding growth goals will be an asset for this opportunity, as well as ASHLIN’s other GSA vehicles. In addition, ASHLIN has developed a suite of digital solutions in business intelligence as well as eLearning that he will leverage to drive growth and create new, diversified, and profitable lines of business.

Before joining the ASHLIN team, Mr. Rin served in Program Manager positions supporting various DoD/Navy projects. As Vice President at his previous employer, he helped the company quadruple its yearly revenue and triple its employment numbers in three and a half years. Mr. Rin is a 1995 graduate of the United States Merchant Marine, has two master’s degrees from the University of Phoenix, is a certified PMI Project Management Professional (PMP), and a Lean Six Sigma (LSS) Trained Green Belt.